The 2016 Presidential Election pinned two candidates facing off against the only person they could possibly beat. On the left, you’ve got Hillary Clinton being investigated by the FBI and with a shady history of corruption, and on the right, you’ve got Donald “spinny-chair-finger-point-you’re-fired” Trump.

How did Trump Win?

6% of people trust the media.

You’ve got CNN giving you water-filled goggles and FOX giving you a kaleidoscope to view the world. Fear-mongering talking heads on both sides polarize the entire country because dividing and conquering attention is more profitable. When your world-view is so influenced by what you see and how often you see it, it’s not hard to get stuck in a spiral and enter the mania yourself.

This hysteria bleeds into social media where word of mouth from friends is taken almost as credible real world data, even though the majority of their half-baked posts are some derivative of a news segment that heavily leans liberal/conservative or is founded on inaccurate information.

20% of people trust the government.

Our presidential landscape is a doodoo lasagna built on empty promises and gridlock. When you have a certain party in power for two terms, the pendulum tends to swing the other direction. That swing might contribute to some of the Trump momentum, but the Trump movement is rooted in anti-establishment.

“She will say anything and change nothing” – Barack Obama 2008.

It doesn’t help he’s campaigning for her while in office on a salary funded by taxpayers.

“Are you qualified to be President of the United States when you’re raising millions of dollars from Wall Street whose greed, recklessness and illegal behavior helped to destroy our economy?” – Bernie Sanders 2016.

It was only a few months later Bernie donated money from his loyal grassroots following to the same “reckless and illegal behavior.” Feel the Bern.

“But how could we elect this sexist pig!”

Emphasis on the we. Clinton won the women’s vote 54 to 42%. Yes, you read that correctly. 42% of women voted for Donald “grab her by the pussy” Trump.  45% of women with a college degree voted for Donald Trump. Does this mean they are subservient Stepford housewives voting on husband orders? Are they so self-loathing and the white male patriarchy is all they know? Probably not. Don’t victimize women for having their own opinion that inconveniently doesn’t match yours.

“But how could we elect this xenophobic anti-Hispanic wall builder!”

29% of Hispanics voted for Trump, up from the 27% who voted for Romney. Perhaps Trumps sentiments spun as anti-immigration actually sanctified legal immigrants.

My parents fought for years to immigrate from communist Bulgaria into the tail end of Cold War America and did grueling low paying jobs to get started. I’m sure most immigrant families have a similar storyline. Ideally, we would create a system that welcomes people from all over the world, but that’s just not the reality. We’ve got Syrian refugees being relocated into the hood in North St. Louis scared for their life. Maybe making an effort to make the living standard in our own cities a notch above a Middle Eastern war zone our own cities should be a greater priority than a massive influx of immigrants.

Travel the world, see some other countries and cool off. The world is full of beautiful places, but there is nothing like being an American in America. I’m saying this as someone who has lived overseas and traveled all over the States. There are some people that never leave the city they were born in, and a few steps ahead are people who have never left their country. Get an Airbnb and spend a few weeks living life like the locals. See how your perspective changes.

“If You Vote for Trump, Unfriend me NOW”

If you’re willing to part ways with friends without hearing opinions, you’re just as bad as the bigoted ideology you’re protesting. There is no absolute truth, there are only people born into circumstances that influence their political and moral opinions. This is almost as embarrassing as your friend spam posting #TRUMPTRAIN.

“What Am I Going to Tell My Kids?”

You’re the parent, I don’t know. You’ll probably have a smoother time than 8-year-old me asking my heavy-accented parents why Bill Clinton got in trouble with that woman. Maybe approach this the same way you would with any of the other crazy stuff that goes on in the world. Kim Kardashian’s multimillion dollar career is built on a sex-tape and selfies. We’re 6 months into mourning a dead gorilla. Start there and work your way up. You’ll somehow end up at doodoo lasagna.

My childhood political memories include Bill Clinton openly lying to the American people about a blow job, and George W. Bush being a C student. How about we stop glorifying politicians as role models. In that same time frame, billion dollar companies were started and life changing music was made.

Don’t relegate your impact to the world to a single vote every four years. Not only are there countless local elections that will impact you and your community in a more direct way, there are opportunities that go beyond politics to change the world.

Facebook is arguably going to have a bigger impact on the world than the 8 year Obama administration and was started by a couple 20 year olds in a dorm. You don’t have to invest your energy into building a Tinder for farmers. Try to make a substantial impact on those around you. It adds up. Be good to people. Build stuff that matters.

“Just Wait Until Our Generation is the Majority”

Trump only got 37% of the 18-29 year old vote, which isn’t surprising. Younger people tend to be more liberal. Older generations attribute this to naivety, but you bastards collapsed the economy, so tread lightly. I’m curious to see what the biggest political topics will be for Millennials in a few years.

Even though we filter into Republican/Democrat camps, we tend to be socially liberal across the board. Hopefully, basic human rights for LGBT and minority communities are no longer a part of major political discussion in a few years and we can focus on things that are less obvious.

We need to start exploring space, stop global warming, solve our energy problems, and increase the living standard for a rapidly growing population. Fortunately, there are a handful of people that have taken these initiatives that are (no shocker here) not affiliated with the government. Elon Musk, Jeff Bezos, Paul Allen, Richard Branson, Mark Zuckerberg, Vinay Gupta to name a few. Heard of ’em? There are many more young brilliant minds and ideas waiting to be discovered and nurtured, let’s get on it.

This election brought out so many deep fears and anxieties that need to be addressed. Several of my close friends dove off the deep end into various internal neurosis and disillusionment with society. Projecting your problems into a binary (let’s be real, Gary Johnson & Jill Stein) election is no substitute for self-nurturing. Give your mind the peace it deserves and don’t let the Internet dictate how you feel. You only get one vote every four years, but you only get one life.

Stop going into Us vs. Them mode. Are you Americans first, or Democrats and Republicans? Never blindly support any party and always cast a cautionary support for those in power. Don’t let the liberal and conservative extremities make you forget how large the middle really is, or how much you have in common. 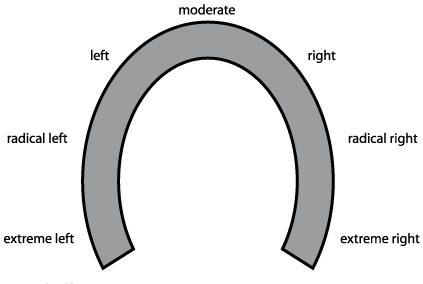 Think of the political horseshoe. Most of us swing around moderate, yet we listen to the radical left and radical right because they exaggerate some of our moral inclinations. Then you have the extreme left and right loonies that are much closer to each other than they are to the moderate.

That was fun, let’s do it again sometime.

Don’t indulge your election disappointment or victorious gluttony on social media. Channel your political fervor and disappointment into ways that benefit the world, your community, your family, your friends, and yourself. Technically, your vote counted for roughly 0.000000001 of the election, yet you can change your life by devoting more energy to yourself, the quality someone’s entire week with a simple gesture of kindness, or your bank account by getting to work.